This is a lazy recipe for chicken herbal soup cooked via steaming instead of the usual simmering method. I just came back from holiday and caught a cold, so I was not really in the mood for cooking anything fancy. I was just yearning to drink some nourishing home-made chicken soup but since there is no one to cook it for me, I use this short cut and equally good method to get rich herbal chicken soup.

For convenience, I used a packet of pre-packed Chinese herbs for stewing chicken soup (in this case I used half a packet for half a chicken). Since less water is used, the soup is concentrated and rich. 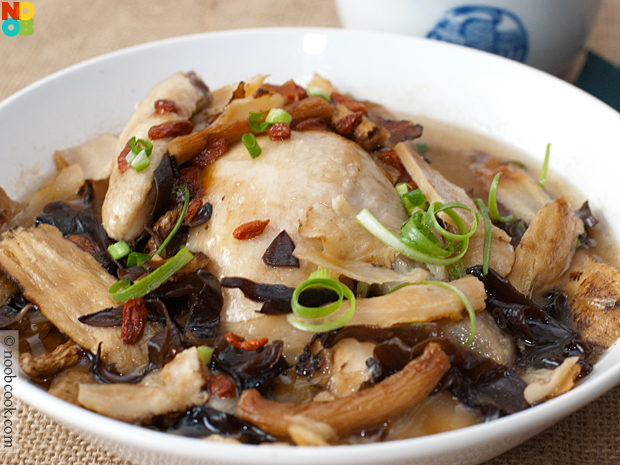 Straight off the steamer

I’m too lazy to cut the chicken so I used a half chicken (butterflied cut) and steamed it together (uncut) with the Chinese herbs, and when cooked, the meat should come off the bones quite easily. I roughly shred the meat using spoon and fork, then transfer the soup and shredded chicken meat into a soup bowl – it really looks more like a stewed soup than a steamed chicken dish when you “repackaged” it this way. The recipe makes two bowls of soup for two.