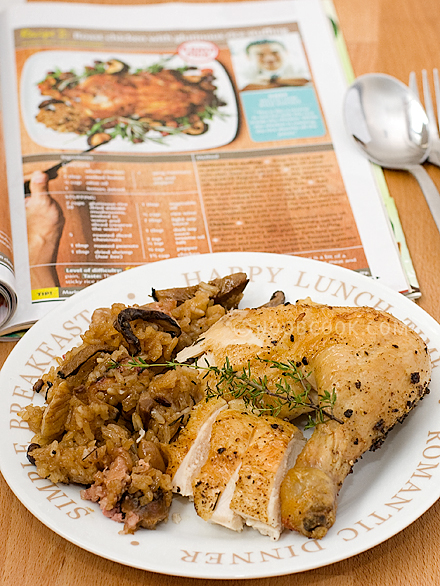 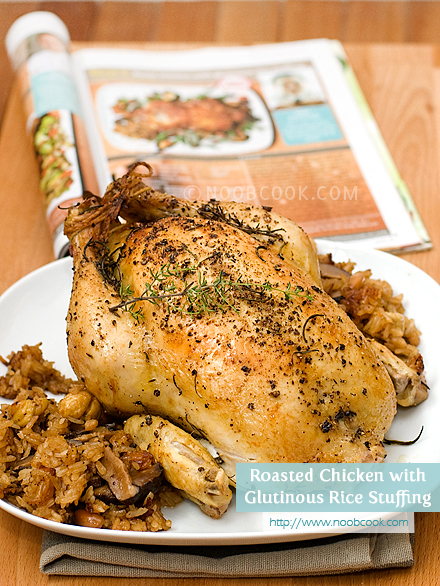 Once again for Christmas, I’ve decided to roast a chicken rather than a turkey. It’s simpler, cheaper, faster and may I also add my biased view, more juicy & yummy than a turkey. A large chicken is more than enough for two, and with the planned leftovers, I can make chicken salad and chicken macaroni soup made from the chicken bones – that’s at least 3 meals in 1 for two of us! So I’ll be experimenting with a few versions of roasted chicken, starting with this one, proceeding up to Christmas. This particular recipe is taken from 8 days (our local entertainment magazine), written by Chef Willin Low from Wild Rocket Restaurant. What I love about this recipe is its touch of fushion. Instead of roasting the chicken with some potatoes and vegetables which everyone is familiar with, the main carbohydrates accompanier of the roast chicken is the glutinous rice stuffing (or better known as lo mai kai in our region). In the words of Chef Willin “This is like a reverse lo mai kai with the rice inside the chicken. While the chicken is roasting, the rice absorbs all the juice”. 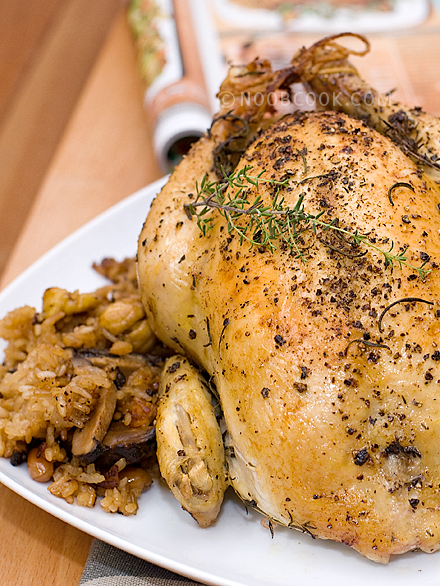 Please note that in the recipe, the portion of the rice cooked is much more than needed for stuffing. If you want just enough rice for stuffing, half the ingredients for (A). In my opinion, since it’s a bit of work to prepare the rice, it’s not much effort to cook more. For the leftovers, you can heat it up over the next few days as a meal on its own so that post that great Christmas feast, you can relax for the next few days and not bother about food or cooking. To simulate the process of the rice being stuffed in the cavity of the chicken, I place the leftover rice in an oven proof dish, drizzle a couple tablespoons of chicken broth, cover with aluminium foil (you don’t want the top to be dried out), and then I heat it up in the oven for about 8 minutes or until warm. Take the dish out, use a spoon to mix the rice evenly, and the result is moist and tender rice much like the one in the chicken stuffing. B told me that this lo mai kai, even the ones I reheated, was the best he has ever eaten!

Directions
Glutinous Rice Stuffing
1. Rinse rice and soak in water overnight, then rinse again till water runs clear. Sieve and set aside.
2. Fry mushrooms in veg oil till fragrant. Add wine, soy, sesame oil, salt, pepper and remove from heat. Add rice, chestnuts, peanuts and shrimps. Toss.
3. Add stock and return to stove. Bring to a simmer, stir, then reduce heat. Cover and cook for 20 minutes, then remove from heat. Stir to distribute the ingredients.
4. Sprinkle some of the water used to soak mushrooms just before stuffing so the rice doesn’t dry out in the oven.

Roast Chicken
5. Brush chicken with melted butter, oil and lemon juice. Season with rosemary, thyme, salt and pepper.
6. Place a slice of lemon, a bay leaf, 1 rosemary, 1 thyme into the cavity and pack the cavity with the glutinous rice stuffing.
7. If you like to truss the chicken (it looks better but it’s optional), tie the two drumsticks together with kitchen twine. Roast at 220C for half hour, take out the bird and baste with its juices. Return the bird, roast at 200C for another 20 minutes to 30 minutes till chicken is cooked (you can baste once more in between if you like).
8. Remove from oven and garnish with cranberries, sauteed shiitake mushrooms, chestnuts, rocket and rosemary.

Cooking Tip
The leftover juice in the roasting tray and the chicken bones can be used to make the best-ever chicken stock. But note that the glutinous rice stuffing will soak up all the juices in the cavity, hence you may need 2 chicken carcass (instead of 1) to make the chicken stock. You can freeze the bones and carcass till you have enough to make the stock.