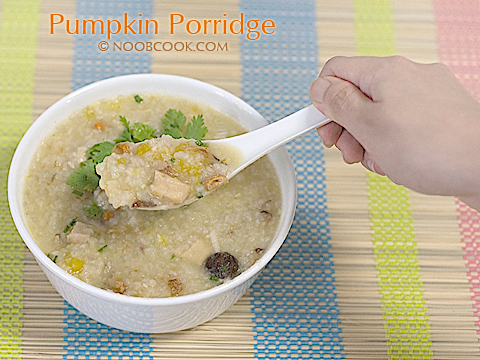 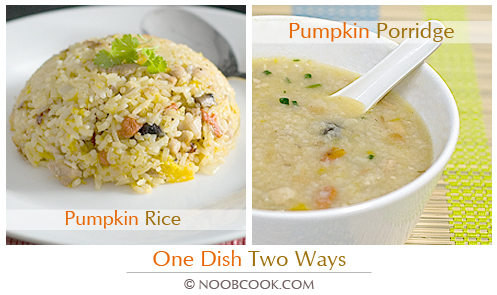 This recipe came about because when I tried to make Pumpkin Rice again, I accidentally added too much water in the rice cooker. The result was wet, mushy and sticky rice which is not nice at all. Instead of throwing it away, I thought of converting the yucky wet rice to porridge and it works totally! I just dump the half-cooked rice into a thermal cooker, add about 1-2 litres of water, and bravo, we had yummy pumpkin congee that day and this accidental recipe is now a keeper’s. When making pumpkin porridge, increase the quantity of salted fish, lean meat and butter.  With so much water, I wanted the congee to still taste as rich as the Pumpkin Rice. I also added red dates & dried scallops to enhance the taste.

1. Fry pork slices in wok. When pork is entirely cooked on the surface, take out and set aside on a plate.
2. Heat butter in wok. Saute garlic, onions and salted fish until the onions are clear. Add pumpkin, mushrooms and stir fry for a short while.
3. Add uncooked rice and stir fry until the rice is well coated in the ingredients.
4. Transfer contents of the wok to a soup pot. Add wolfberries, red dates, previously cooked pork, water and bring to a boil. Stir the base of the pot frequently to prevent the rice from sticking to the base.
5. Simmer on a low heat for about 20-30 minutes (or longer if you want congee*), while leaving lid partially covered (if you cover fully, the water will spill over). Season with light soy sauce. 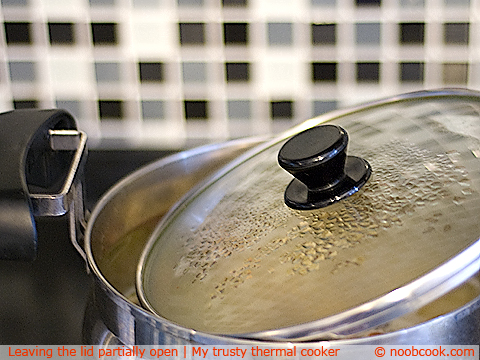 * Using a thermal cooker will save you hours of gas consumption if you are making congee, soups & stews!