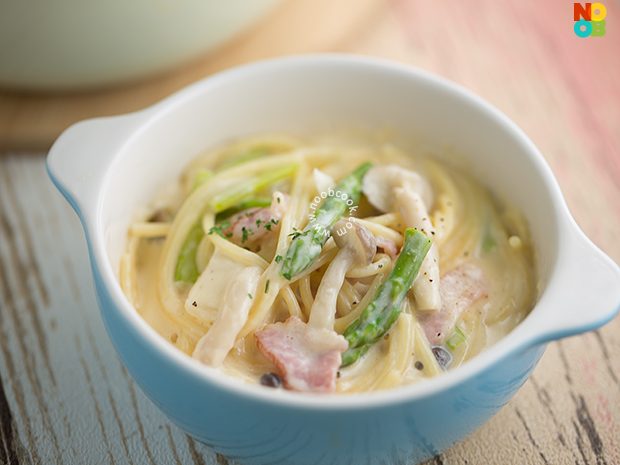 This is a one-pot creamy soup pasta adapted from my favourite anime this season, Yuru Camp △. It’s a story about 4 lovable high schoolers’ camping life. I’ve never felt so much warmth and well-being from watching an anime. It’s a highly recommended watch for anyone who needs total relaxation & bliss in an instant. This is not the first time I’ve cooked from an anime, but the first time I’m sharing an anime recipe on my blog (and apparently I’m not the only one who do so). More to come maybe? :)

Alongside camping, the anime regularly showcases camp-style outdoor cooking. In episode 5 (where this recipe is adapted from), Rin-chan who is a solo camper made a delicious creamy soup pasta with bacon, asparagus and hon shimeji mushrooms. It’s a delicious and gratifying one-pot meal. I succeeded on my first attempt (just like the character Rin-chan did) because the instructions are really simple. 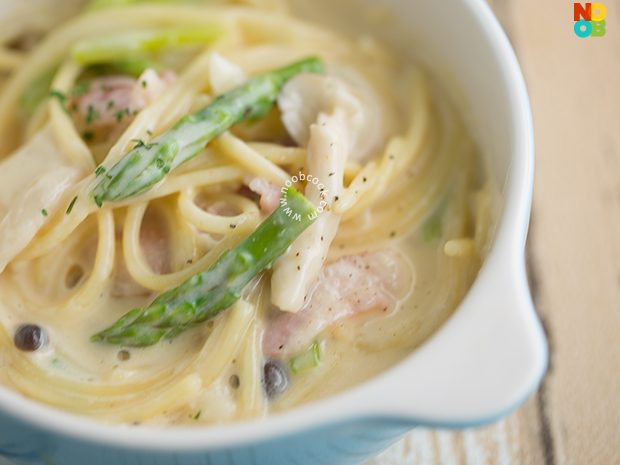 There is no cream in this “creamy” pasta. The creaminess is achieved only with milk and 2 sliced cheese :O

This is what it looks like in the anime: 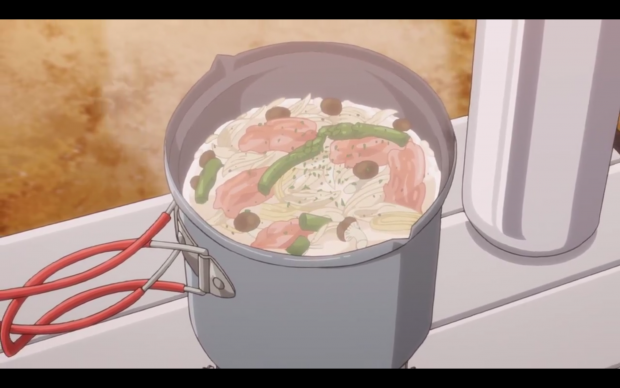 And this is what mine looks like, freshly cooked and still on the stove: 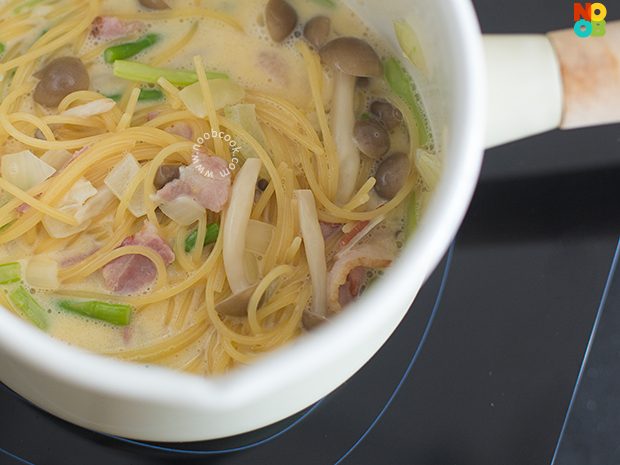 Mine doesn’t look too far off? Except that my version is much messier and uglier??? :P When the dish has just finished cooking and still very hot, it resembles soupy pasta as pictured above. I only took one picture from the kitchen top because …

… as the pasta cools down, the soup gets thicker and creamier. So if you love pasta in its soupy state, eat it quickly (ok you can take a quick photo on your phone first). If you want a creamy pasta sauce, you can enjoy it more slowly. Either way, do serve it immediately once cooked, as it goes from soupy to creamy within 15 minutes of cooked, as the noodles soak up the liquids. Note: This creamy effect is more apparent since I halved the milk (100ml instead of 200ml) stated in the original recipe in the anime. If you prefer a soupier and less creamy sauce, double the milk used.

This is the sauce at the end of the meal. So thick and creamy :O I think some bread to soak it up will be really nice. 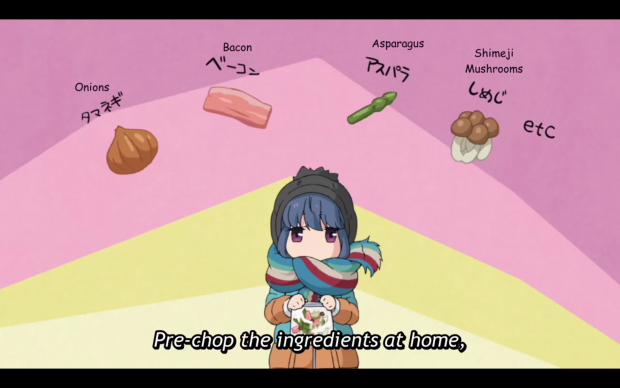 Pictured above are the ingredients which can be prepared the night before (whether if it’s for camping or home): onion, bacon, asparagus & hon shimeji mushrooms. Not shown above, you will also need garlic, spaghetti, olive oil, milk, 2 slices of cheese and chicken stock (or water + chicken bouillon cube). 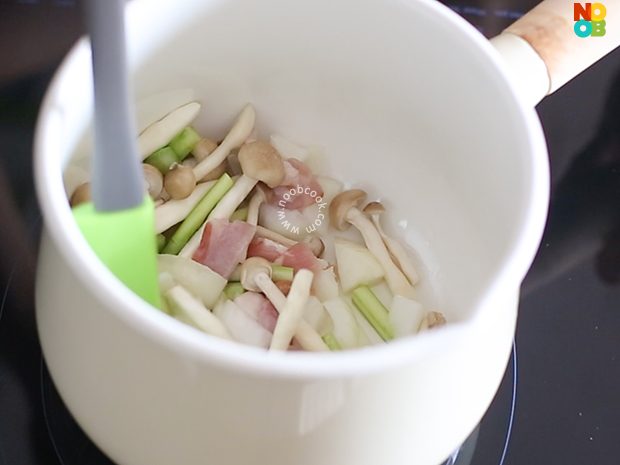 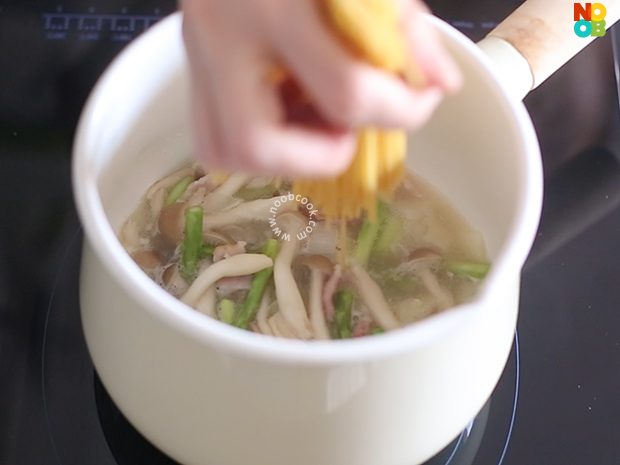 Then add in 150ml chicken stock. When the stock is boiling, add spaghetti (snap it to two, camping-style, if your pot is small). Cook it for for about 5-6 minutes, which is about 3/4 of the cooking time of whatever pasta you are using. By then, the liquid in the pot will also be greatly reduced. 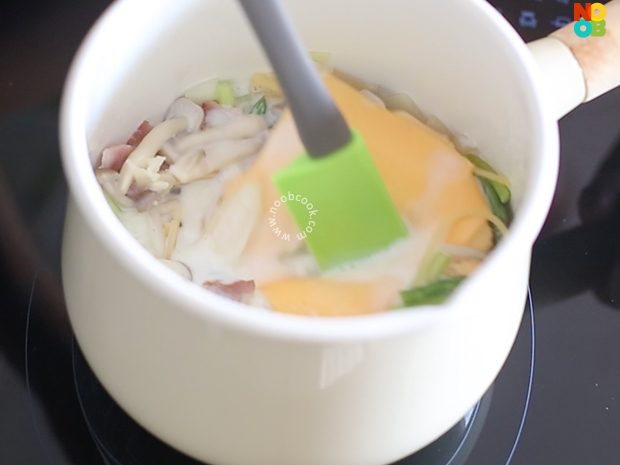 Turn down the heat to low so that it is hot but only gently bubbling (from past experience milk curdles in high heat). Stir in milk and 2 sliced cheese. I’m using non low-fat fresh milk (I hate low-fat milk) so I’m not sure if that contributed to the creaminess. I also halved the quantity of milk as stated in the anime. As for cheese, I’m using cheddar. You can use any favourite cheese. I would opt for an orange cheese so that the resultant pasta sauce will have a bit of colour. Use a spatula to stir continuously so that the cheese is fully melted. Finish up cooking the pasta for about 2 minutes in the meantime. 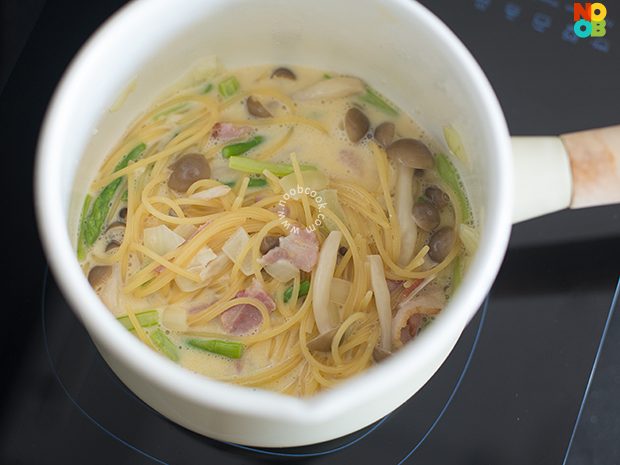