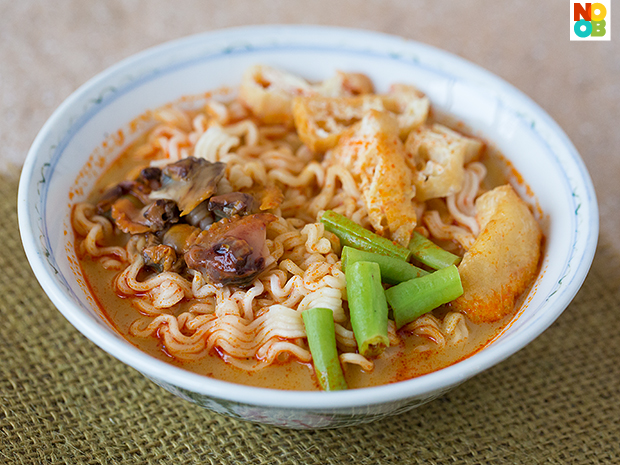 Status Update: I took a break from serious cooking and recipe writing due to a fall/wrist injury two weeks ago. I’m much better now and regular recipe posting will resume soon :) 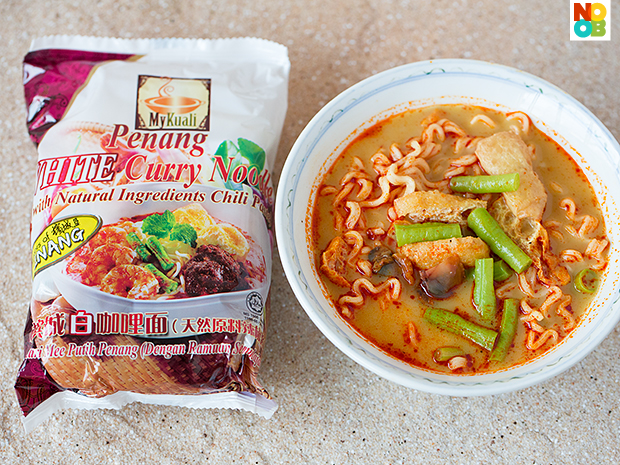 The Penang white curry instant noodles craze started some time back (an instant noodles sensation is a once-in-a-blue-moon phenomenon), and as usual, I am slow to pick up a fad. It was supposedly the brainchild of a homesick student’s (the co-founder of MyKuali, the brand which started this fad) cravings for a taste of home. It made The Ramen Rater 2013 list for the seventh spiciest noodles and they are popular both in Asia and overseas. It used to be difficult to find them in Singapore, as they are selling at obscure mini marts. I even know of people buying or ordering them from overseas.

But by now, these ramen noodles (along with copycats with very similar packaging) have entered our mainstream supermarket shelves. With all the hype surrounding it, how can I give them a miss? :) 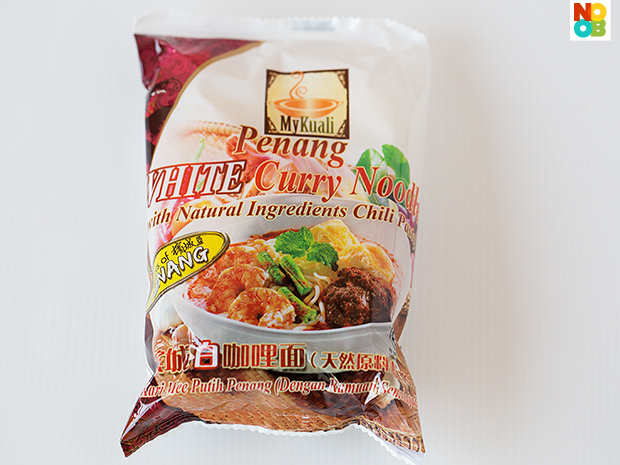 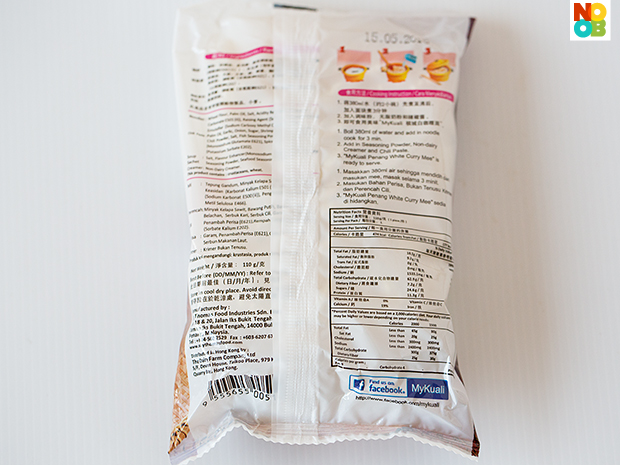 Back of packaging. Made in Penang, Malaysia. 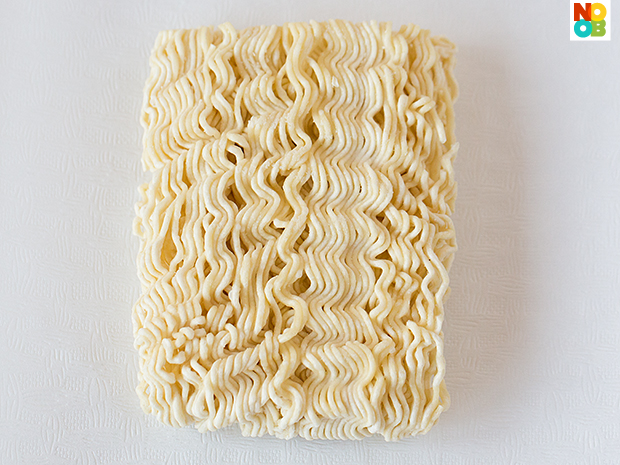 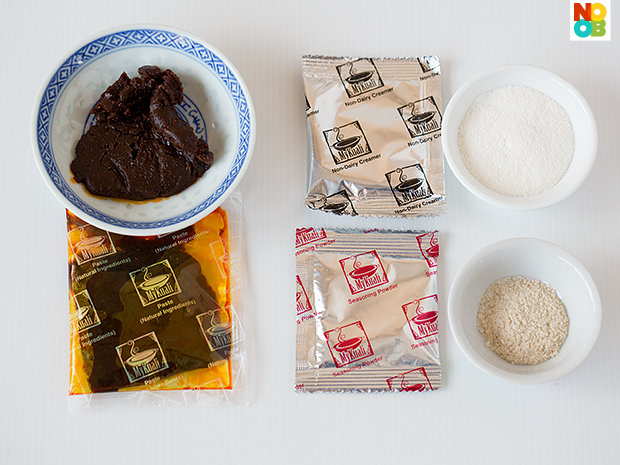 Seasonings sachets consisting of curry paste, non-dairy creamer and seasoning powder. I always wonder why are they called white curry when the soup is not white? I bet it is due to the creamer, and I also read that the original Penang curry is actually white. 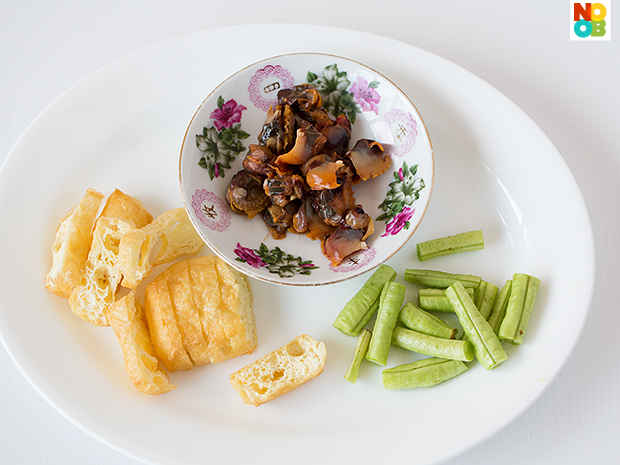 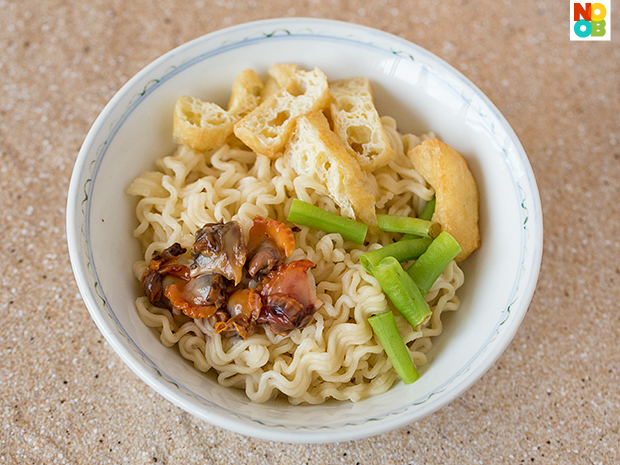 Cook the noodles in boiling water until they just separate (much lesser than the stated timing of 3 minutes which I think will grossly overcook the noodles). I always cook the noodles and soup separately. Top the drained noodles with the prepared ingredients.

In a fresh pot of boiling water (instructions say 380 ml but I think 300 ml is more than enough) dissolve the curry paste, creamer and seasoning powder. Pour the soup over the noodles. I find the curry paste a bit hard to dissolve fully but it’s no biggie. 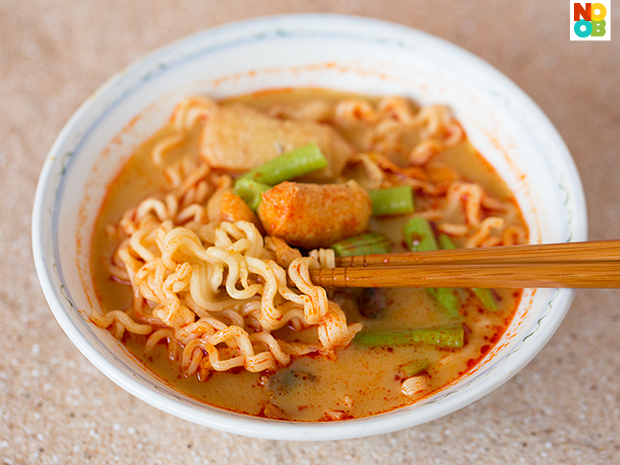 I can’t comment on how close this is to the real thing, as I am not too familiar with Penang cuisine. But on its own, it is pretty decent and there is enough heat for spicy food lovers. You can adjust the water and chilli paste added to tweak the spiciness and richness of the soup to your liking. The husband love this much more than I do (he said they are the best!) I personally thought there was a slight “medicinal” taste which I can’t really identify, but he said there wasn’t. Maybe I have strange tastebuds? I also think I had the case of overly high expectations from all that hype. Overall, I do think it is decent and something different. It might be worthwhile keeping a few packets in the pantry to satisfy any sudden curry cravings (though my favourite for that category is still the simple and homely Maggi curry instant noodles which I grew up on – shall review that the next time!)

At S$3.80 for 5 packets (around there), I also thought it is a bit expensive compared to other instant noodles of the same weight (usually for this price you can buy Korean ramen which is much bigger serving).

Where to Buy in Singapore