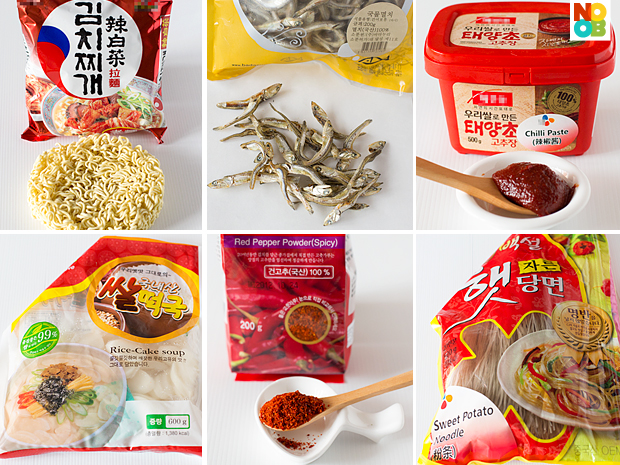 If you are very new to Korean cooking, just like me, you might be intimidated by the list of unfamiliar ingredients whenever you look at a Korean recipe. In this post, I’m compiling a small and growing list of Korean ingredients which are used in the Noob Cook kitchen so that you know what they look like, and will be able to purchase them easily.

I will update the list whenever I add anything new to my pantry. You can get some of the more common items, such as as gochujang (chilli paste), kimchi, ramyeon (instant noodles) and dangmyeon (glass noodles) from major supermarkets. But some ingredients, such as gochugaru (red pepper powder) may be less common and you need to buy them from a Korean supermarket. I shop primarily at the Korean supermarket at Koryo Mart at Marine Parade and Shine Korea Supermarket at Far East Square (basement) for all the Korean ingredients which I can’t find at our local supermarkets.

Here is a list of Korean ingredients which have been used in the recipes on this site. Clicking on the links will bring you to a list of recipes tagged with the ingredients.