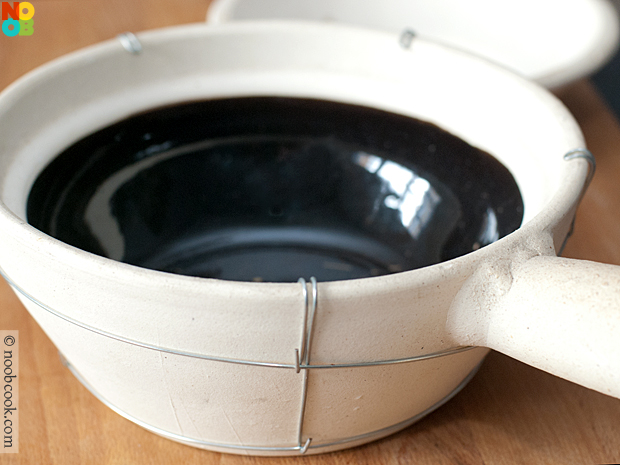 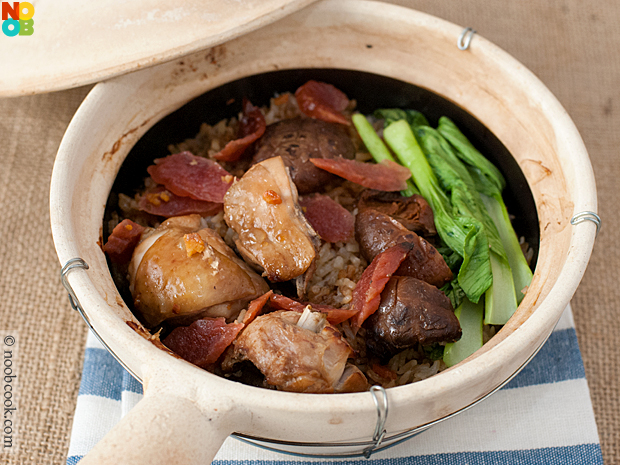 I’m now a huge fan of claypot (砂鍋/ 煲仔) cooking. I fell in love with it ever since I used it for the first time to cook braised chicken with bittergourd, and the most recent claypot dish I cooked – claypot chicken rice – totally impressed me again with the distinctive smoky flavour. In short, everything looks and tastes better when cooked in a claypot. This is a short article about Chinese claypot care as a reference for those who might be interested to venture into claypot cooking too. If you have more tips about claypot cooking, please share them with me at the comments section.

1. Since the material is porous, it absorbs water. When cooking food, the moisture is released, making the cooked food moist, juicy and tender similar to steaming effect. There is also less evaporation of water and food do not burn so easily.

2. The claypot retains heat well, so it can cook food in a quicker and more effective way. It also keeps the food warm and further slow-cook it, with lid close for at least another half an hour after cooking.

3. You can re-heat and serve the food in the claypot right away.

4. Dishes such as claypot rice have a wonderful earthy and smoky flavour which is distinctive with claypot cooking.

Chinese claypot with glazed interior and coiled wires on the exterior

1. Make sure there are no visible cracks on the wall and the lid can close snugly.

2. Choose a claypot that comes with metal wires along the walls (pictured above) as it helps to conduct heat quickly and evenly throughout the casserole.

How to prep a brand new claypot for first time use 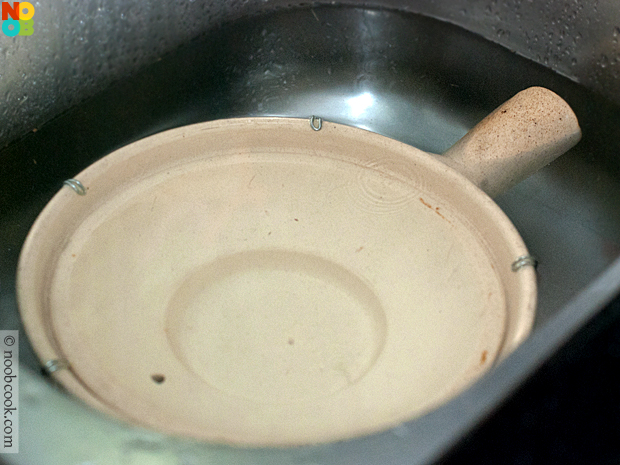 1. Totally submerge and soak the claypot in water (turn the lid inside out) for at least half an hour (pictured above).

2. If there is any dirt or powder on the claypot, scrub it well with a hard brush or non-metallic scrubbing pad.

3. If you bought the type which is porous throughout (without the glazed interior walls), you can also boil some water or porridge in it after soaking.

4. Leave the claypot at room temperature to air dry, do not use dish washer.

5. For first time cooking in a new claypot, do not cook food with strong flavours such as seafood or curries as the smell may linger on and affect the taste of the other dishes. 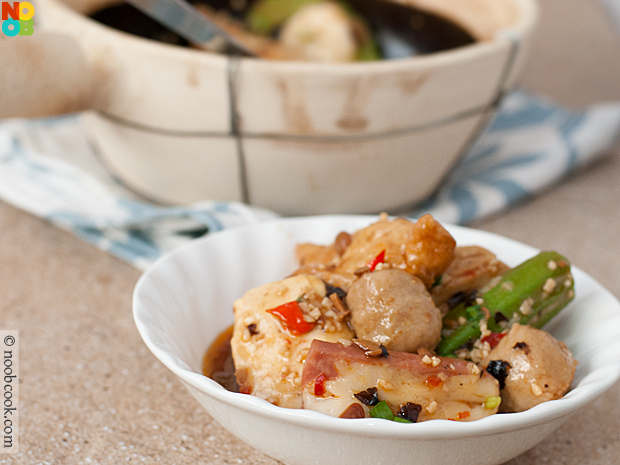 2. Temperature. Since claypot conducts and retains heat well, you generally do not need as high heat as you normally need. You can use lower temperature to cook the same type of food, compared to the heat you normally use when cooking in other types of cookware.

3. Washing. After cooking, use a hard brush or non-metallic scouring pad to scrub. Wash the glazed part of the claypot with mild soapy water. For the unglazed part, do not use detergent as the porous material may absorb it. Instead, use natural cleaning agents such as lemon or vinegar solution.

How to Pan Fry Gyoza

How to Make Ginger Juice

How to retain the beautiful purple of...

How to Cook Porridge/Congee (Stove-top...