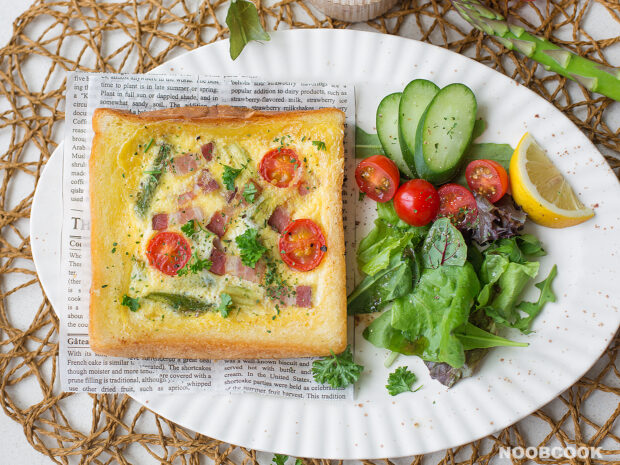 Get Recipe
Filed Under: 15-minute Recipes Breakfast Eggs Meals for One or Two Recipes Step-by-Step Recipes

This asparagus & bacon “omelet-in-a-hole” (read about it in the next paragraph) is the perfect brunch when I work from home. The serving size is just right for me – one thick slice of bread stuffed with my favourite savoury ingredients. It is fun to make, the recipe is flexible enough whether you want to make 1, 2 or many toasts. And you can make it with any combination of fillings, making this omelet toast a great way to clear the odd food scraps – this asparagus & bacon omelet-in-a-hole was made with leftover scraps from my asparagus & bacon aglio olio recipe. 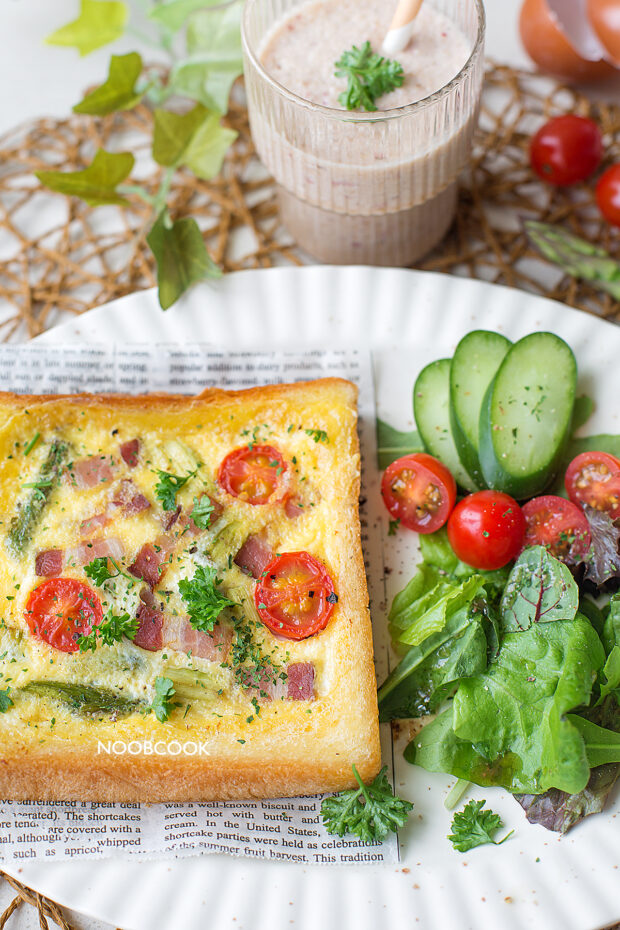 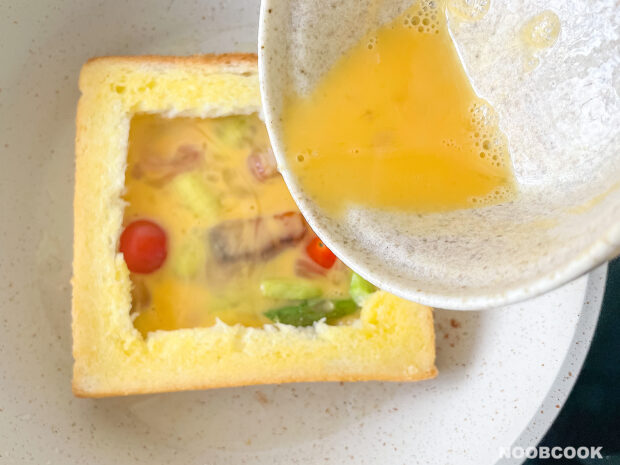 I saw this omelet toast in a YouTube channel I followed (first 2 mins 30 secs of the video). You basically make a hole in a slice of bread, fill it with your favourite pan-fried ingredients, egg (a must) and cheese (optional). Then you put back the cut piece of bread and grill the omelet toast in the pan. The end result looks quite seamless – one can barely tell that the bread was hollowed out, filled with delicious stuff and patched back. Check out the following step-by-step photos to see what I mean. 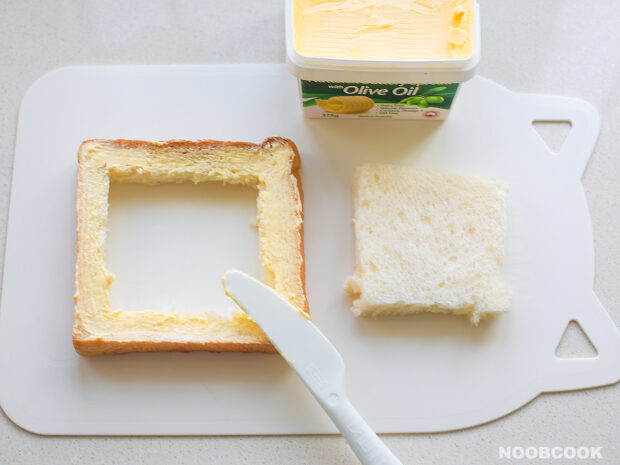 Using a knife, carve out an inner piece of bread as close to the bread core as possible. Set aside both the inner and outer pieces of the bread. Spread butter on one side of the outer core of the bread.

You do not have to worry if the cut is imperfect. My cut-out bread always look awful with zigzag edges, but that did not really affect the final product too much. 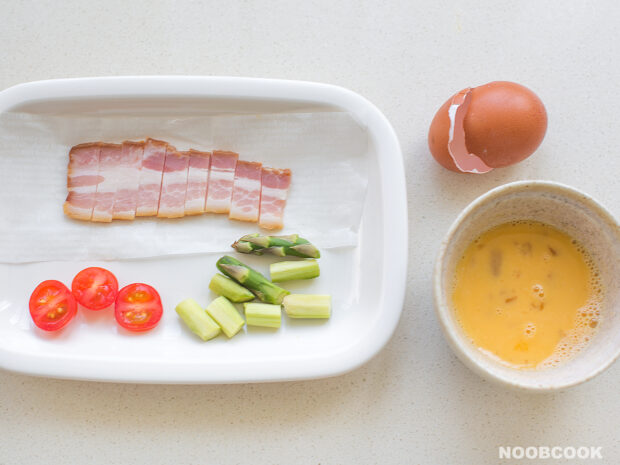 In a small bowl, whisk eggs and season with a small dash of salt & pepper and/or Parmesan cheese powder. 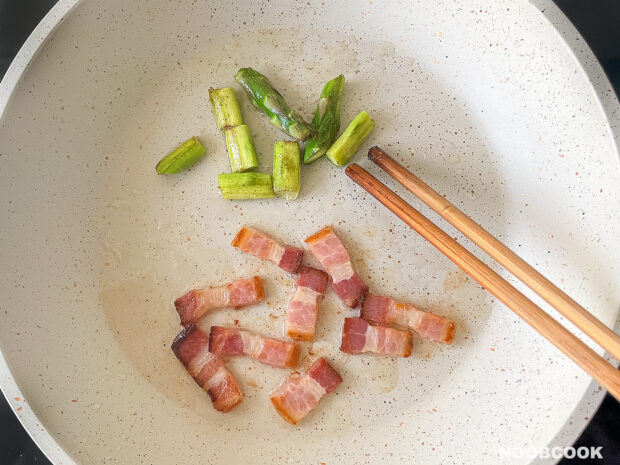 Fry asparagus and bacon until cooked. Set aside on a plate. 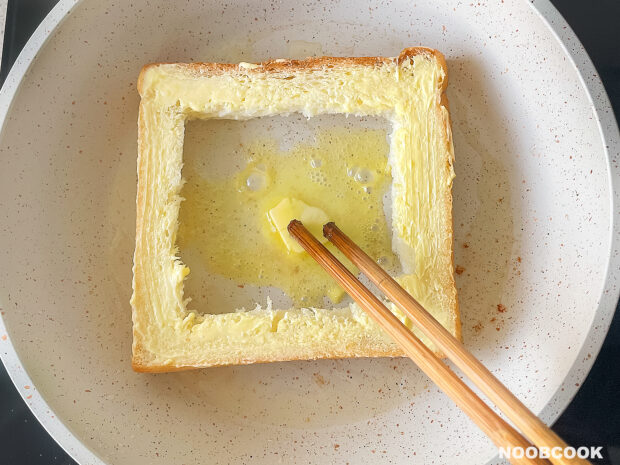 Clean out the pan a little with paper towel. Place the outer core of the bread buttered side down in the pan. Melt a small knob of butter inside the hole.

Note: I made a mistake & place the bread buttered side up instead in this series of photos :P 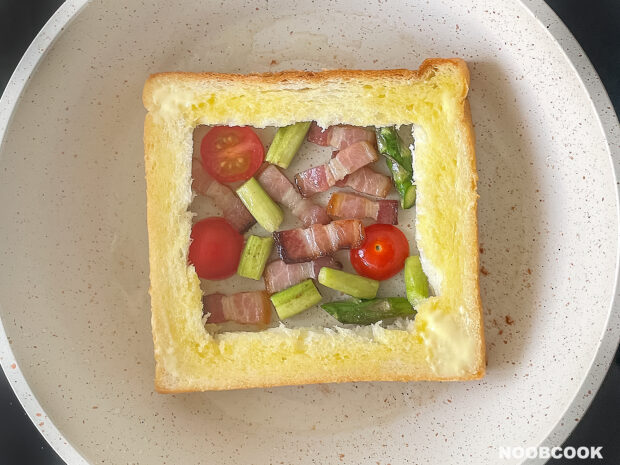 Arrange the previously cooked asparagus bacon, as well as cut cherry tomatoes, inside the bread hole. 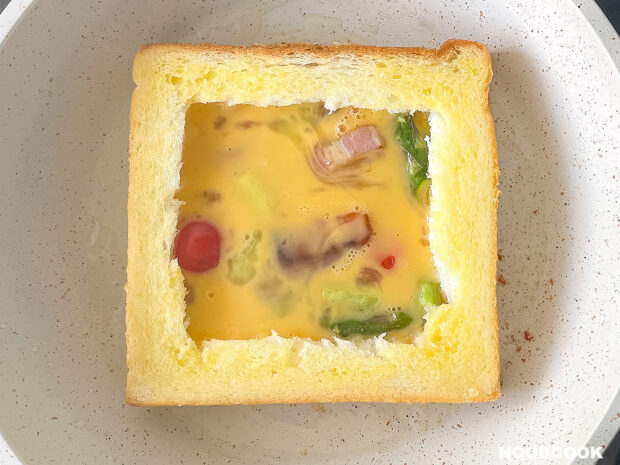 Pour beaten egg into the hole. 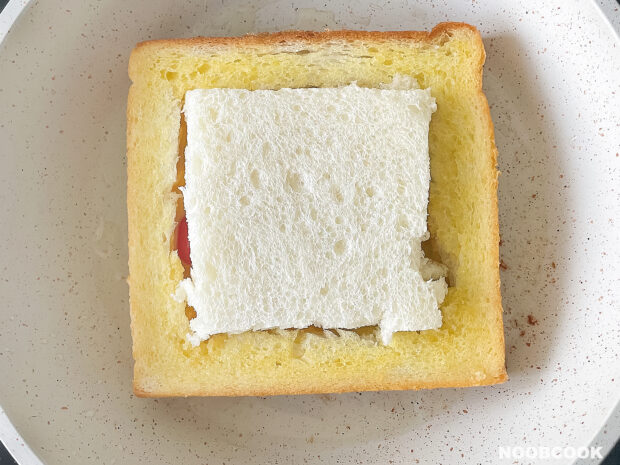 This is the magical part. Put back the inner piece of bread to fit the hole… 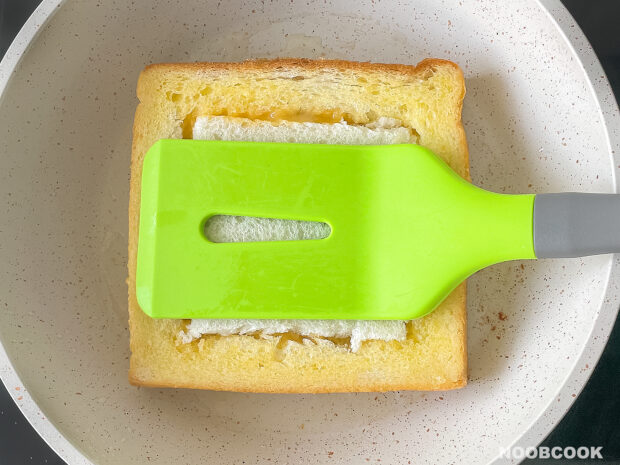 Press down the bread for about 20 seconds with the back of a spatula to help the bread seal nicely. After this, cover the pan with a lid to cook the egg for about a minute in low heat. 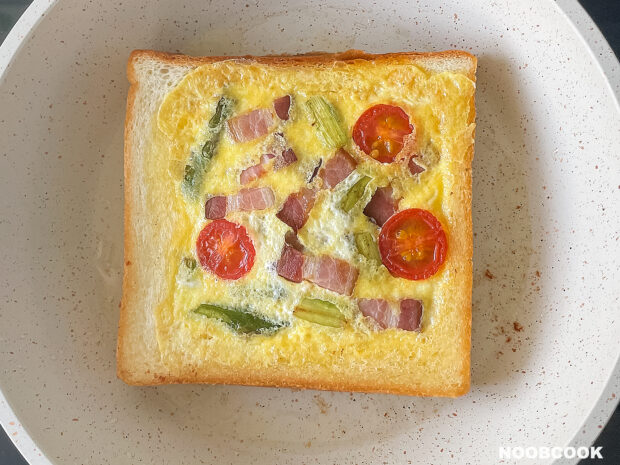 As a result of putting the buttered side up instead of down, there are some parts of the bread which remains white. This is especially noticeable since I am using a small egg. But it’s no biggie, I just have to spread some butter along the white edges.

When you flip the bread, the cut area looks as if it has been sealed magically even with all the ingredients & egg packed into it! Garnish omelet toast with parsley and serve with a small side salad. This omelet toast makes a fast, tasty and wholesome breakfast!