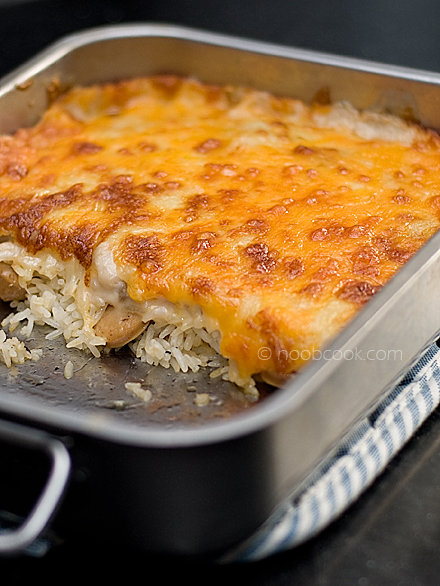 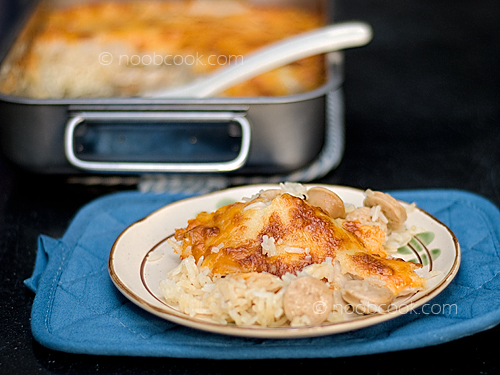 I had a lazy (but totally enjoyable) Saturday and stayed at home to play Prince of Persia the whole day instead of going out or doing anything useful. Hence no time for fancy meals, but one still got to eat ;) So I made a whole tray of baked rice where B and I had for both lunch and dinner. It was sooooo delicious that even though we had it for two meals straight, B and I still fought over the remaining portions, and towards the end, B scraped the tray even though there was nothing left. The recipe is actually based on my earlier chicken and mushroom baked rice (just swap the chicken and mushroom for sausages) which many readers had tried and left some really good feedback about the recipe. So I guess this recipe is really foolproof having been tried and tested by quite a few people ^_^ I’m going to make seafood baked rice next time. I tried a few other variations before and this sausage one is really good. Do buy nice sausages (those gourmet type that you pan fry for breakfast, they are usually refrigerated and go by weight – I bought cheese & pork sausages – NOT those frozen dark brown type that are used for bbq or canned ones). 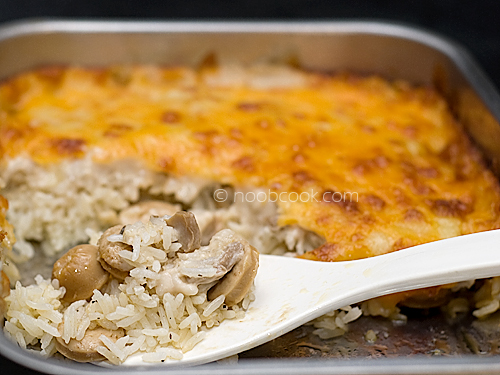 – 1 1/2 cups uncooked rice
– Water to cook rice
– 5 garlic cloves
– 200g sausages, sliced (I use the gourmet type of sausages such as chicken cocktail)
– 15g butter (or use olive oil for healther version: reader suggestion)
– generous tablespoons mushroom soup (I use Campbell’s, straight from the can – no need to mix with water or cook)
– Shredded Mozzarella Cheese (about 150g)
– Shredded Cheddar Cheese (about 150g)
– Salt & Pepper
– Parsley (garnishing)

Directions
1. Wash and rinse uncooked rice until water runs clear.
2. In a heated wok or saucepan, melt the butter. Add the washed rice, salt and black pepper to taste. Stir well.
3. Wait for the rice mixture to cool, then transfer to a rice cooker. Add the garlic cloves. Add water to cook rice (I use slightly more than 1 1/2 cups of water – adjust the water amount according to your cooker).
4. When the rice is cooked, stir in the cut sausages. Portion out the rice into oven-safe baking dishes (you can also use disposable aluminium tray) until about half the depth of the dish.
5. Smear some mushroom soup sauce on top of the rice, and topped with a layer of shredded mozzarella and cheddar cheese.
6. Baked in a pre-heated oven at 200C (392F) for about 20-25 minutes, or until all the cheese has melted and is very slightly browned. Garnish with parsley if desired.