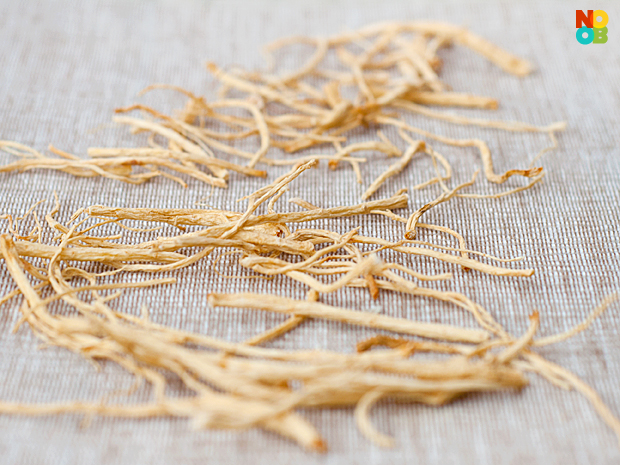 Introduction
Not all ginseng are created equal. For example, most types of Korean Ginseng is generally considered to be ‘heaty’ while American Ginseng (洋参) is known to be ‘cooling’ (based on the Chinese herbalogy system of ‘yin’ and ‘yang’ foods). The latter (American Ginseng) is definitely preferred if you are living in a tropical country (Singapore). This is also one of the cheapest types of ginseng in the market.

The particular type of ginseng I have shown in the photo is known as “洋参须” (Yang Shen Xu). The first two words 洋参 (Yang Shen) refers to American Ginseng, and the third word 须 (Xu) literally means “beards”, which have also been translated as American ginseng “fiber”. As you can see from the photo above, they are small, thin and wispy looking (hence it’s resemblance to beards?)

Properties
A well known property of this ginseng is that it is very ‘cooling’. So consuming it will supposedly reduce your body “heatiness” (降火). Lots of mums like to use this ingredient for brewing tea for their children during the school exams period so they can ‘burn the midnight oil’, because this type of ginseng is also known to keep one mentally alert (提神). Therefore, if you are someone who doesn’t sleep easily at night or have to avoid caffeine near bedtime, you should likewise avoid consuming this ingredient at night. You should consult a doctor for the suitability of consuming this ingredient if you are pregnant or have special medical history.

Storage
Store sealed ginseng (in a container) in a cool, dry place (such as fridge or freezer section).

Recipes
Check out recipe with ginseng as a key ingredient.

Where to Purchase it in Singapore
Asian dried goods section of supermarkets, and at Chinese medical halls.