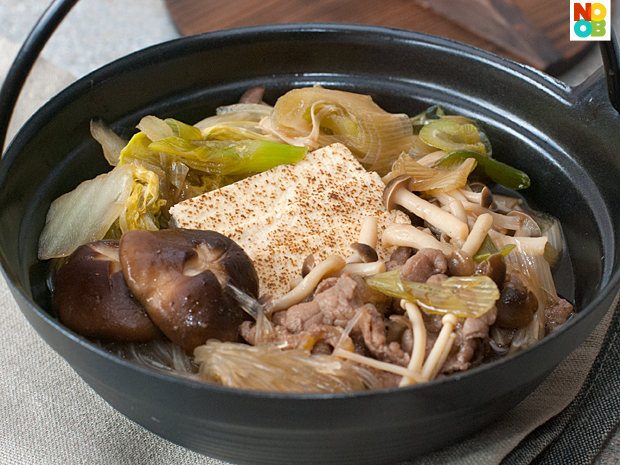 Sukiyaki (鋤焼/すき焼き) is a Japanese dish in the nabemono (Japanese hot pot) style. It consists of thinly sliced beef with other ingredients such as tofu, negi, mushrooms, jelly noodles and cabbage.

The sauce is made up of sake, mirin, sugar and soy. When eating, Japanese often dip the ingredients in raw beaten egg. Cooked udon or soba is added at the end to soak up the remaining broth. It is extremely easy to whip up at home and a perfect dish for beginner cooks. It’s always quite expensive when one orders it at Japanese restaurants with a few measly slices of beef, so making it at home is affordable (with better quality of beef) and effortless.

Recently, I have been hooked on cooking Japanese, largely because I was inspired by Cooking with Dog, a cooking channel on YouTube. The tagline of the show reads “It’s not what you think” – i.e. it’s not cooking with dog meat, but cooking with a dog as your host – the videos are narrated by a male poodle named Francis in perfect Japanese-accented English. While the chef (a human, in case you are wondering) is demonstrating how to cook the dish, Francis sits obediently behind the counter as he “voice overs” the steps of cooking. He sounds earnest and sincere with encouraging words such as “It’s so easy, even a dog can do it” (aww). With so many cooking videos out there, trust the Japanese to be one step ahead in terms of creativity in their presentation to stand out among the rest. Of course, this wackiness will not hold on its own had the recipes not been rock solid good – the steps are clear and the dish is always beautifully presented. I felt so inspired that I finished  all the videos within 2 days. The first dish I tried out was this Sukiyaki.