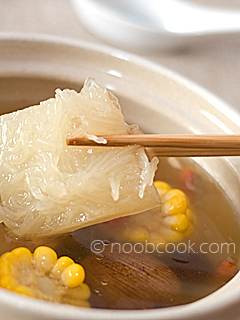 I am cooking shark’s fin melon soup! NOT shark’s fin + melon soup, but soup made with shark’s fin melon … so don’t worry, no sharks were killed in the making of this soup. As you may have guessed, shark’s fin melon got its name from its resemblance to shark’s fin, a popular and exorbitantly expensive Chinese delicacy. When cooked (see photo on right), the strands of the melon separate a little, resembling cooked shark’s fin, hence the name of this melon. Shark’s fin melon is cheap – I bought a piece of melon for only S$1.50. I was told that real shark’s fin on its own has no nutrition value and no taste, and the overall taste of the shark’s fin soup comes from its earthy broth of chicken, crab and other ingredients. This melon, on the other hand, is packed with lots of taste and nutrients, even my mum swears by the health benefits of this soup. If I am selling this soup, my sales pitch will be that “this soup is more nutritional and much, much cheaper than real sharks fin soup”.

You May Also Like: Imitation (Fake) Fin Soup Recipe

In Singapore, this melon is labeled as ‘Shark’s Fin Melon’ (鱼翅瓜). The flesh resembles winter melon but the green skin covering looks entirely different. According to Wiki, in other countries especially in the west, the other names of this melon are spaghetti squash (Cucurbita pepo), vegetable spaghetti, noodle squash, Spaghetti Marrow (in the UK) , squaghetti or Sharkfin Melon (鱼翅瓜). However, spaghetti squash and the other names may not be a 100% accurate translation, though it gives a good start. According to readers comments, the spaghetti squash in the west is sort of yellow/orange outside and inside. There may be a slight variation of breed from location to location. 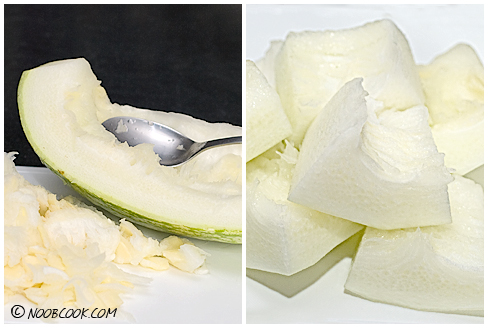