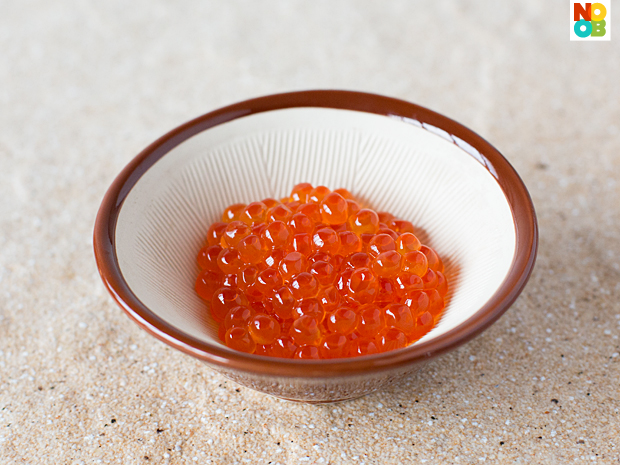 Ikura (イクラ) is the Japanese name for salmon roe. It is made by curing salmon eggs (roe) in salt and is popular in Japanese cuisine. You can eat it on its own (like eating sashimi) paired with warmed sake, but my favourite way is to eat it with rice, in the form of an ikura don (donburi) or an ikura handroll.

They taste salty, fishy and oily (all in a pleasant way) and are loaded with omega. Asthetically, they are also pretty to look at! They resemble jewels of the sea, due to their gem-like appearance and glistening red-orange hue. For best results, use a wooden spoon when scooping and serving the fish roe. Metal spoon and utensils may affect the taste of the roe.

They are relatively expensive compared to other roe such as ebikko (prawn roe) and tobikko (flying fish roe), but significantly cheaper compared to high-end western caviar. You can actually cure your own ikura starting with an entire sac of raw ikura (nama sujiko in Japanese). Besides being cured in salt, they can be cured in soy sauce (Ikura no shouyu-zuke; salmon roe preserved in soy sauce).

In Singapore, you can purchase ikura from Japanese supermarkets such as Isetan Scotts, Meidi-Ya & Sakuraya.

Check out recipes tagged with the ingredient “ikura” on Noob Cook.