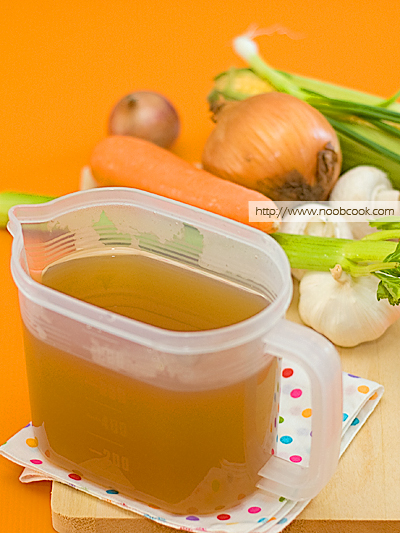 Filed Under: Broth/Soup Base How-To Recipes

I’ve finally taken the plunge of making my own soup broth for cooking. I guess this is almost a certain inevitability for those who cook though I think it happened a little sooner than I expected. Make no mistake, that as a humble noob at cooking, I was never a purist in the kitchen and I have always been a huge consumer of convenience foods. I am not so arrogant as to scoff at those who are using commercial, store-bought broths for I value their convenience as well. But I would just say that the benefits of making my own vegetable broth kind of outweigh the convenient aspects of it – or should I say that once I started making my own broth, there is no turning back for me =)

Benefits that I am reaping from making my own vegetable broth

– Cutting down on food wastage and leftover vegetables. I often find myself with a good amount of leftover vegetables by the end of the week. Vegetables that has lost their prime-of-their-life glow but is you know, still edible. Making your own vegetable broth is an excellent way of using up these leftovers and reducing the guilt because when it comes to your own home made vegetable broth, almost anything can go into it.

– Practicing my lack-lustre chopping skills. I love to chop the vegetables to small pieces to speed up the cooking process. Some people hate making vegetable broth due to the chopping, but this is exactly the part I love – I find that chopping has a theraupeutic effect on me, almost like meditating. But if you are impatient, you can cut the vegetables to bigger chunks.

– Home-made tastes better. To me, it is clearly the better taste that is free of the hints of chemicals & commercial-ness. Do you need a more compelling reason?

– You can adjust the taste to your liking. Each time you make your vegetable broth, you can adjust the ingredients to get a different taste – for example, more garlic for an earthy, homely taste. I personally also like to add too many onions because I just love the taste and smell of onion soup. 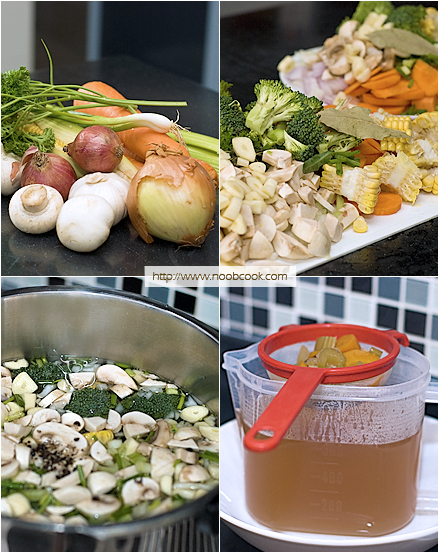 – Collecting vegetables early. Start collecting scraps early. Once you know you can’t finish using the vegetables, store them in the freezer so that they stay fresh, especially when you know you won’t be making the broth so soon. Vegetables that have withered a little or lost their colour slightly is ok to put into the broth – but not vegetables that is starting or have already gone bad.

– Using energy-saving gadgets. Energy-saving gadgets such as a pressure cooker and a thermal pot is ideal for making home-made broths because they cut down on cooking time, and you also do not lose that much liquid from the steam evaporating.

– Storing. Store in fridge up to 1 week, store in freezer for a few months. For those I store in the fridge, I like to use a jug type of container (like the one you see in the first photo) for easy pouring when I use it. For those you wish to freeze, store them in shallow small containers with tight fitting lids.

– Usage. The uses of your home made broth is so versatile. The common use is as a base for soup, and you can toss it in stir fries, sauces and basically all kinds of recipes.

What types of vegetables to use?

The type of vegetables to use is subjective as everyone has their own preferences. The following is just a guide, so you can be flexible and add anything according to your preference.

– The base ingredients. Typically, the essentials that make up the body of the broth are garlic, onion, celery and carrot. These ingredients add a lot of flavour, depth and sweetness to the broth.

– Vegetables you may want to avoid/add in moderation. Some vegetables you may want to avoid include: Beetroot (unless you don’t mind a broth with an intense red), tomato (too tangy for my palate, personal preference), coriander (the taste can be overwhelming for some), portobello mushroom (unless you don’t mind a darker colour) … and the list goes on.

If there is a vegetable you have but ensure if it’s suitable to go into a vegetable broth, either check it out online first … or use your intuition. For ingredients you are using for the first time, start by adding a small amount to test if you can accept the taste. After a few rounds of experimenting, you will become quite the expert at concocting your ultimate home made broth recipe. 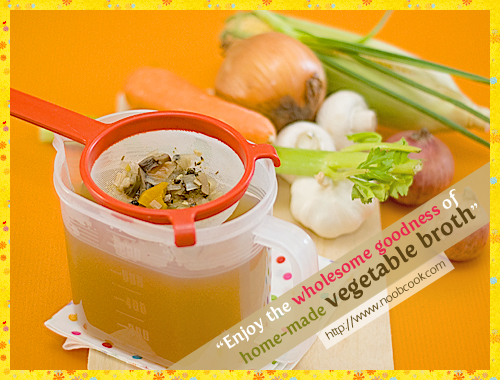 Filter the broth through a fine sift so that you get clear, particle-free broth

And now, on to my recipe. Here’s my simple way of making vegetable broth:

Ingredients
(makes about 3 litres of broth)

Note: I tend to use a lot of onions so the onion flavour is quite intense. Feel free to lessen the amount in your version.

1. Chop the vegetables up. Chopping them to smaller dices helps to speed up the cooking process but leaving them as bigger chunks if you don’t have time is fine as well.
2. Add chopped vegetables and 3.5 litres of water in a pressure cooker (or any other types of cooking pots, stockpots you have), cook for as long as you can. I cook mine in a pressure cooker for at least 3 hours.
3. When the broth has cooled down, filter it through a fine sift.
4. Store the home made broth in containers. They can be stored for roughly a week in the fridge and a couple of months in the freezer. When freezing, store them in exact volumes (or in ice cube trays for smaller portions) that you use for your recipes; do not re-freeze once they have thawed.

– Blogher Article: How to Make Vegetable, Meat, Chicken, or Fish Stock and Five Reasons You Should Be Doing It

– the kitchn: Tip: Save Vegetable Scraps for Stock

37 comments on “Home Made Vegetable Broth”